“Ukulele Pu’uwai means ‘heart ukuleles’. Not only is its rhythm reminiscent of the beating human heart but they touch the soul.”  -Woodley White

My ukuleles feature the design considerations I have learned from my mentor in guitar building, Jeff Elliott. He suggested I consider bridging the transverse bars and use a fan bracing similar to the Torres/Hauser classical guitar. I have found that these design considerations make for a more responsive top and hence produce more pleasing, lyrical tones with longer sustain.

This is a tenor instrument with a 17 inch scale length. Most often the body connection is at the 14th fret but I have made 12th and 13th fret instruments as well. Most often the tenor is built with Koa from the Big Island where I live. I have experimented with alternative woods but Koa has a particular resonance here on the Big Island. All wood is responsibly harvested from fallen timber and has been seasoned many years before I build with it. 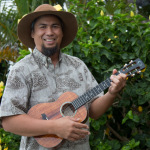 “This is my favorite ukulele” – Keoki

The Puka is a Ku’uipo with a sound port. Reducing the size of the soundhole on a guitar or ukulele increases bass response. Not wanting to lose bass I reduce the sound hole on the front of the uke by ¼” to compensate for the additional opening (puka).

I am currently designing a concert size instrument (the Hana Hou) and a baritone as well. The Keiki model (soprano) is also under development.